I am at a loss for words at how these guards hate you. They just come in and take from you, meaning you property, stuff you paid for and then they write you up and give you a disciplinary ticket when you question them about it. But as you know, I won’t give in to the injustice of this place because of the system that’s in place!

Being an American and a Marine means that I love this country and I’ve never had anything bad to say about it, but after dealing with the racist court system here in Arizona, I know now that my country has let me down.

When the cops first stopped me in August 2012, she said to me that there was no evidence or any reason for her to arrest me, and “it was her word against mine” and that she had no probable cause to arrest, but they still came after me!

Now they denied my appeal! Why? They didn’t give me a reason. I didn’t rob anybody, and these people know it. I need to find a way with God’s help to attack the case in my next stage of appeals. I am doing a Rule 32, as I write this letter, and God willing I’ll get a different judge, not that trial judge who allowed this case to go to the jury without any evidence. 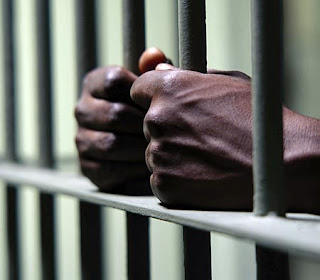 There has been so many times in my life where I was blamed for things because I am black. I was hanging out with my friends who were white and they lived on the west side of old Columbia turnpike, which separated the black neighborhood from the white neighborhood. We were at a house. I was 8, and to my surprise, this man ran up to me and was about to hit me, while he was calling me the N word.

I was saved that day by an officer in the US Coast Guard! We were two 8 year old kids, running around after school, playing, that’s all, and this crazy guy who was full of hate came after me because I am black. I stood there frozen.

When the cops got involved, they came after me for no other reason than I was black. They told my parents that I provoked that guy and that “they should keep me in my place.” Meaning on the other side of the road in the black neighborhood for many miles.

But in all that has happened to me – some from my own doing and some from those who are full of hate and fear – I trust God and I also love my country. America is a beautiful place, but there is an evil inside some of her people.

There have been other times in my life where the police have shown nothing but hate, and others when the police have done their job with complete honor. As you read this, you see that I do have some pain from all the unwanted evil from people who happened to be white, who are in authority, but that evil will not stop me from telling the truth.

Not all cops are evil. There are countless people who do the right thing each and every day! But there have been times when I’ve thought that what if? Do you know what I am saying? In light of all the negative, there is hope, and I know I will be out of here one day, and hopefully sooner than later!

Click here for descriptions of all of the prisoners I write about at Jon’s Jail Journal ranging from Mafia hit men to giant transsexuals.
Shaun Attwood
Posted by Jon at 2/09/2017 11:44:00 AM

God bless you T-Bone! May you someday get this terrible wrong, turned right-Godspeed!! <3

I am very happy to read this. Appreciate your sharing