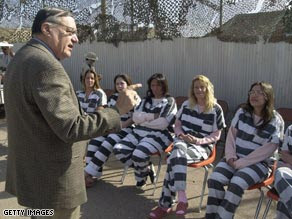 'Toughest Sheriff' takes act to small screen
.
HOLLYWOOD, California (CNN) -- Reality television featuring law enforcement officers on the beat is nothing new. A show featuring a lawman who makes jailed inmates wear pink underwear and uses actors to trick suspects, however, is a new twist.
.
Maricopa County, Arizona, Sheriff Joe Arpaio -- whose showy brand of justice has raised charges of discrimination and civil-rights abuses while making him a hero among fans of his tough-on-crime attitudes -- will star in "Smile: You're Under Arrest."
.
The show, which premiers this weekend on Fox Reality Channel, features Arpaio and other officers using elaborate ploys crafted by comedy writers and carried out by professional actors to arrest suspects with outstanding warrants.
.
In one, a suspect is invited to a fake fashion shoot and told he's going to become a supermodel, according to Fox Reality's Web site. In another, a suspect is tricked into what he thinks is a job as a movie extra and, after a staged argument between the film's "director" and another actor, gets promoted to the starring role.
.
"It's kind of fun to show how stupid they are and, as I say, the looks on their face," Arpaio, 76, said of the suspects wanted for DUIs, drug charges, missed court dates and other offenses.
.
But Arpaio's critics aren't amused.
.
They say they fear the show will give the controversial sheriff positive publicity, ignoring what they call a darker side to his 16-year tenure as top lawman in the county that includes Phoenix.
.
"It's going to celebrate a sheriff that's frankly scaring this community, a sheriff that has seen violent crime increase significantly in his county, a sheriff that is racially profiling the Latino community, and I doubt that the show is going to reflect that," said Paco Fabian, spokesman for the immigrant-rights group America's Voice.
In a statement on the group's Web site, Fabian calls Arpaio a "modern day Bull Connor," comparing him to the public safety commissioner in 1960s Birmingham, Alabama, whose use of attack dogs and firehoses on civil rights demonstrators made him a symbol of racial intolerance.
.
Dubbed "America's Toughest Sheriff," Arpaio makes many of his county's 10,000 or so inmates live in tents. He reinstituted chain gangs -- including crews for women and juveniles -- banned smoking, coffee and movies in his jails and, most recently, moved to require all inmates with money in their jail accounts to pay for their own meals.
And then, of course, there's the pink underwear.
"They were stealing the white underwear, smuggling the underwear out of the jail," Arpaio told CNN. "So you know what? Give them pink. The other reason is they hate pink. Why would you give the 10,000 inmates the color they like?"
.
Earlier this year, the mayor of Phoenix wrote a letter to the U.S. attorney general's office, asking the FBI and the U.S. Justice Department's civil rights division to investigate Arpaio's aggressive illegal immigration crackdowns. Mayor Phil Brown wrote that Arpaio's sweeps show "a pattern and practice of conduct that includes discriminatory harassment, improper stops, searches and arrests."
The letter came after Arpaio, who had already been the target of hundreds of lawsuits, launched a series of what he calls crime-suppression patrols in largely Latino neighborhoods. Critics say the patrols use racial profiling to unfairly target Hispanic drivers and pedestrians, while Arpaio says they have resulted in the deportation of hundreds of illegal immigrants, including some with criminal records.
.
"We are the only ones cracking down on the state's human smuggling law," Arpaio said.
.
Fabian said America's Voice is considering putting pressure on companies that advertise during Arpaio's show. Either way, the series offers another moment in the spotlight for a lawman who has never shied away from it.
.
"I'm not going to brag," Arpaio said, "but there isn't anybody in the world who doesn't know who this sheriff is."
.
If you are a U.S. citizen and wish to sign a petition against Sheriff Joe Arpaio click here.
.
Email comments to writeinside@hotmail.com or post them below. To post a comment if you do not have a Google/Blogger account, just select anonymous for your identity.
.
Shaun P. Attwood
Posted by Jon at 12/27/2008 03:18:00 AM

That filthy son of a bitch! Maybe it's a good thing I don't have cable. My pal who lives in AZ and works at a TV station says she sees his pathetic ass all the time and all his security guards are mexicanos w/o papers.

The problems with Arpaio have now been discussed by the editorial board of the New York Times.
http://theboard.blogs.nytimes.com/2008/12/31/americas-worst-sheriff-joe-arpaio/

in order to understand exactly how this new "Smile You're Under Arrest" tv show works i decided to watch an episode. it was the one featuring a phony spa where those later being arrested had facial masks and cucumbers on their eyes, laying down wearing nothing other than a black and white striped robe.

after a few moments the deputies come in and each say that they are deputies and then remark that ____ is under arrest. the dude who then approaches the arrestee high fives while saying, "look into the camera and say 'Smile You're Under Arrest' and you are on a reality show but are also really being arrested."

in the final arrest of the show the nasty Arpaio presents himself and scolds the arrestee for not paying child support, having a dui, etc. i'd like to find out if these people have missed court or failed to comply with post sentencing court orders. if this is pre-sentencing it seems especially inappropriate. not that anything about the show is appropriate (or for that matter anything about Arpaio)

i am completely disgusted and hope we are able to shut down this nonsense.