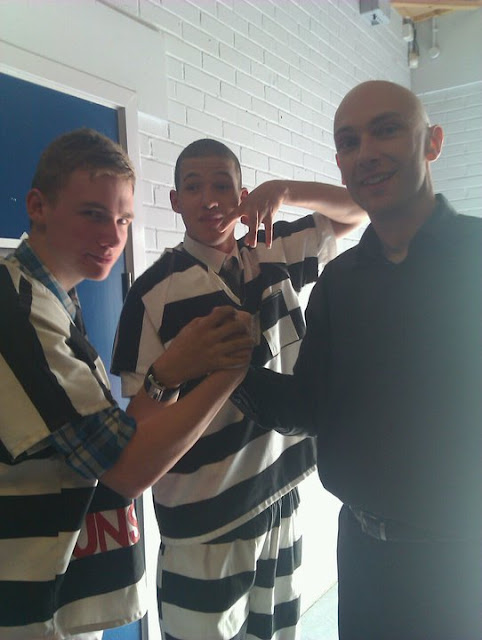 Just got back from Welling School in Kent. I am still on a natural high after talking from 9am until 3pm to almost 700 students. It was one of the greatest receptions I’ve had so far at a school.

The organisation skills of the contact teacher were quickly evident. Upon arrival, I was assigned an entourage of student helpers from the sixth form, who ensured that I was properly taken care of, and took me on a tour of the school. Some of them went beyond the call of duty during the third talk when a window covering fell down, rendering the audience unable to see my PowerPoint images on the big screen. As the audience moaned, the helpers – two clad in black and white jail outfits – rushed over and raised the window covering back up, holding it there, arms raised, for the next 30 minutes.

The first talk was to sixth formers, so they got the hardest hitting version. During the break, I ended up in the sixth-form common room, fielding a bombardment of questions. It felt good to be surrounded by so many people interested in my story, and I was reminded of how lucky I am to have the opportunity to influence so many young people, that something good has come out of the bad situation I put myself in at Arpaio’s jail.

One of the most moving moments of the day was when the student helpers and contact teacher presented me with a thank you card and a box of chocolates. They wrote:

Thank you for coming in today to share your experiences. We appreciate all your support in making us aware of the consequences. We wish you the best of luck in the other schools you speak to.

I also received this email from the contact teacher:

Just a quick e mail to say THANK YOU so much. Your talk was inspirational, heart warming and educational. You have encouraged pupils in a kind and subtle way to reflect on their own lives and not take life for granted. Most of all, you have made them think! They have stopped in their tracks and hopefully if the issue of drugs ever arises, they will have learnt to think hard and long about the consequences of potential actions.

I was in the speech you did today to the 6th form, I found your talk really motivational, it really made me think about what it is I want to do and how I want to spend my life. You made the speech so interesting and enjoyable, I’ve rung my nan and great nan in london and told all my family your story - I'm so glad you come to share it with us. I wish you the best thank you so much Kelle

i am a student form welling school; and i just want to say that the speech you did today was BRILLIANT!!!!!!!! it really opened by mind on the reality of prison than what it is proclaim to be
thanks!!!! Rachel

Hey Shaun, your talk today was amazing, really had my attention! Hearing your story was amazing and knowing that you have been through that journey yet managed to be as strong as you are amazes me too! Thank you for coming in! Robyn.

Awesome job Shaun!
What you are doing is truly a good thing. It goes beyond just writing and speaking. Its purpose and message transcends so many levels and reverberates into different peoples lives in a positive manner. Kudos.

IT WAS A FANTASTIC , INTERESTING & MOTIVATIONAL SPEECH!!!! & I REALLY ENJOY IT !
WISH YOU ALL THE BEST & THANK YOU

Was glad to have the oppurtinity to meet you, good luck in the future. Don't forget if you need a soundtrack for the film who to come to ;).

Very good to here my friend! Enjoy and cherish all the good time's!

You are doing so much good visiting these schools and talking to the kids, thats where it needs to start!! On behalf of mums I thank you

You were amazing! I loved every minute of your speech including the spider bite photo!