skip to main | skip to sidebar
Sheriff Joe Arpaio Questioned for 5 1/2 Hours: The Beginning of the End? 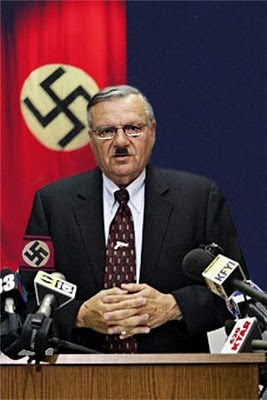 I doubt it! This guy has more lives than all of the people his guards have murdered over the years. Here's the article by Yvonne Wingett Sanchez and JJ Hensley:
Maricopa County Sheriff Joe Arpaio was interviewed for 5½ hours by an investigator examining allegations of misconduct involving some of Arpaio's top aides, according to billings released to The Arizona Republic by the Pinal County Sheriff's Office.

The billings for the first time reveal that Arpaio was officially questioned about the allegations, which focus on the activities of commanders in his inner circle. Among the unanswered questions is the depth of Arpaio's knowledge of his subordinates' activities.

Arpaio on Wednesday declined to characterize the nature of his conversation with investigators.

"I'm not going to get into whether I was a witness," Arpaio said. "We have met quite frequently to discuss the investigation."

According to more than 30 new pages of billings, private investigator Keith Sobraske billed Pinal County $351 on Jan. 12 for preparations to interview Arpaio and for the actual interview, which took place from 9 a.m. to 2:30 p.m. at Arpaio's administrative offices.

Arpaio received the 1,022-page investigative report from Babeu last week, but has denied a demand by The Arizona Republic and 12 News to release findings of the six-month investigation. Arpaio's office cited federal civil-rights laws that protect public employees, among other reasons, in blocking release of the information.

The billing records also indicate that in March, as the inquiry neared an end, investigators were in regular contact with Deputy Maricopa County Attorney Clarisse McCormick, speaking with her by phone nearly 20 times during that month.

McCormick advised Arpaio not to release the report, according to the sheriff.

The Maricopa County Board of Supervisors agreed with Pinal County to pay for the investigation. According to the new invoices, its expenses from January through April 18 amounted to $39,000, putting Pinal County's total billings at about $85,300.

During that time, investigators completed 34 interviews and follow-up phone calls with the investigation's targets and witnesses.

Some were Arpaio's current and former employees, including the sheriff's former chief financial officer and former deputies once assigned to Arpaio's public-corruption unit. Other billable hours included conversations with an FBI special agent who has gathered evidence for a federal abuse-of-power inquiry into Arpaio, as well as an investigator for the Arizona Attorney General's Office who led a separate investigation into political fundraising by Arpaio staffers.

The billings also reveal that investigators:

- Interviewed Fox for a third time and conducted a telephone interview with Hendershott.

- Captured video surveillance of an apartment, and met with personnel at an apartment complex in north-central Phoenix.

- Uncovered a new allegation of misconduct, which documents do not explain.

- Explored allegations involving the political action committee known as SCA that solicited funds from wealthy donors and Arpaio's top commanders and donated the money to the Arizona Republican Party. That included interviews with county Elections Director Karen Osborne and the administrative judge appointed to review those campaign activities.

- Examined public records involving two security and consulting firms, including Blue Steel Consulting, a firm owned by sheriff's Deputy Aaron Brown. The deputy oversaw security for the Fiesta Bowl. A recent investigative report found evidence of potentially illegal bowl-employee conduct and spending irregularities that could jeopardize the bowl's non-profit status. Brown is also the subject of an internal Sheriff's Office investigation to determine whether he performed bowl work while on county time.

Munnell's memo alleged years of behavior by Hendershott, Black and Fox that ranged from inappropriate to potentially criminal. He described Hendershott as a bully who retaliated against subordinates that questioned him, and who browbeat others into refusing to cooperate with investigations into the Sheriff's Office.

A friend sent me this photo. Because he lives in Arizona, he is too afraid of Arpaio to post it to the Internet. He said he designed it to protest Arpaio's neo-Nazi tactics, including racial profiling, and all of the deaths in his jail system.

thank god i dont live in arizona and dont have to be afraid of the tosser. i have shared it with my friends and hope everyone else is too:)

We can only hope that the end is in sight.

karma my friend beleive in its power :))

his time will come on judgement day i would not want to be in his shoes this man is his own worst emermy and he dont even know it DAWG :)))

lol once again Shaun karma by the way mate great read loved the book every mans story would love to hear some more when we get the time and i will tell you a little about the snowbear :)))))

thanks, mick, yes, lets trade stories, i can tell you've got some good ones, dawg :)

we in Az love sheriff Joe. If you can't do the time, don't do the crime. I don't feel sorry for you. Prisoners smuggle in the dope they kill themselves with. You would really cry if all your visits were behind glass. As for food, my tax money feeds you, I like the way the prisoners eat and live. Next time, do your scrimes in England where they will coddle you. Sandy