Whilst in the talk we learned about how the prison is in the control of the “gangs” rather than the guards. It was also brought to the attention to audiences what the “gang” members also did to the other inmates. The majority of incidents often lead to many fights and even deaths in the prison. He told us about all different events that he had witnessed and the violence he saw. 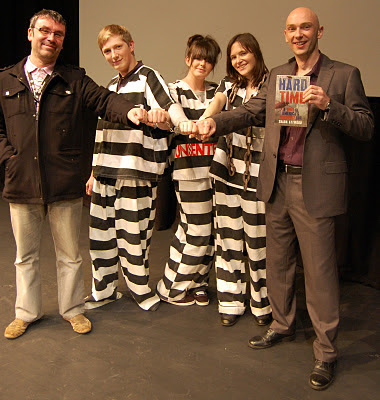 Lydia is next to me in the above pic.

Shaun also mentioned about the conditions that was surrounding him and the other inmates in the prison. This involved Cockroaches that “flooded” the room whilst you slept and the spiders that bite the inmates and the treatments that involved squeezing the wound until all the “puss” had left them and then that they placed salt onto the bite to reduce the bacteria as it is the prisons policy not to treat insect bites. During the talk Shaun also mentioned the reality of what happens to young members that enter an adult prison for the first time, and how the media portray that they are going to be going into the prison and be having fun and relaxing. When the reality is that they are more than likely to be robbed, raped, abused and be stabbed by the handmade knifes called “shanks” that the inmates make at night.

Shaun also mentioned other inmates and how he got their stories out of the prison and onto the internet. He also mentioned that because of this that he had a lot of protection around the prison. This was because that he was their only contact to the outside world. One of the prisoners he mentioned was called T-Bone. T-Bone protects the young inmates that look like they are going to be raped because as I have mentioned they are an “easy target”.

In conclusion I think that Shaun’s talk to the college makes you think about the choices you make and what could happen to you if you make the wrong choices in life. I think that students learned; the realities of drugs and prison against their glamorisation, the consequences of choosing drugs and a high-risk lifestyle, the realities of being a prisoner, and the future consequences of the choices they make now. I also think that Shaun’s talk was very eye opening because the realities that we were being told about his time in the prison were unbelievable. The talk was also graphic with the images he was showing and the stories that he was telling were very strong and powerful images. Since Shaun had short intervals with students from the college reading parts of his book had people wanting to read the book “Hard Time” as you wanted to read more about his experience.
Posted by Jon at 12/07/2011 01:22:00 PM

I (Heather Heaton) am recommending my new ebook ("Her Letters from Prison") as a motivational resource for reading pleasure, review, contemplation, and comment. My ebook will validate your inquisitive doubts about what goes on in women’s prisons; it can justify the efforts spent toward ministries to women’s prisons; and it can be an inspirational (tell-it-like-it-is) resource for drug rehab/prevention programs. The book is non-fiction inspirational Christian romance (It is what it is!); and the original letters (with prison art) are included as images for authenticity. You can go to http://www.heather-heaton.com and purchase “Her Letters from Prison”, Parts 1 and 2.

If you don’t happen to own a Kindle, Nook, or some other eReader device, then download the FREE Adobe Digital Editions software to your computer to read the “epub” version of my ebook as purchased from Smashwords. Multiple versions of my ebook are available on Smashwords.

I am a 34 year old college student trying to better my life, in spite of the baggage I carry from my previous life. To date, I have been quite successful in accomplishing this goal; and I will use the proceeds from the book to help support myself. My picture is posted, with my book descriptions, at Smashwords.

My recently published ebook is entitled ("Her Letters from Prison: Part 1 & Part 2", by Heather Heaton). The ebook was published at Smashwords (www.smashwords.com). A brief description of the ebook follows:
1. Breanna tells the true story of her experiences in prison through her letters to her friend Heath. This is a story of survival and a quest to make a better life. The letters describe the daily shocking events of prison life involving drugs, sex, utter devastation and humiliation, anger, hopelessness, despair, and finally happiness and hope.

2. Breanna's "truth" stands still even as the world around her trembles and burns! Bad things do happen to good people; and Breanna is the perfect example of this truth.

3. Breanna's inner strengths and principles eventually win out over the corruption and evil that surrounds her. With God's help, Breanna survives the horrible experiences of prison life and regains her self-confidence and hope for a better life.

Customer/Reader Review of “Her Letters from Prison”
Heather, ever since you first contacted me about your ebooks (and when I received them) I have been giving them traction. At least two women on my case load checked them out, (like a library card so I would get them back) and were very moved by the content. I haven’t had another problem with their behavior since they read them. So…I know they are working. They should be required reading, ordered by a Judge before women are sentenced to probation, so that they would fully understand the consequences of their behavior. The coverage by The Prison Art Coalition blog is very good news both for Heather and for those that will read her story.