NOT GUILTY! Praise God, he did it! Not guilty on everything. The jury only went into deliberations for a few hours. It didn’t take them long to see through the lies.

I had to stand in front of 120 people, while the court read out loud the crimes I was charged with, but hadn’t committed. The people in the justice system are cold, and I mean real cold.

One crime I was accused of was in an area with a security camera. The cop in this case said the video footage wasn’t available because there was no one there to make a copy for him.
My lawyer asked the cop on the stand, “Wasn’t there anyone in the tech department in the Phoenix Police Department who would make a copy for you?”
“I don’t know,” the cop responded, which in other words meant it was a bogus case.
They didn’t care. They went after me like a dog after a cat.
The cop admitted on the stand that he knew a witness had lied multiple times. They knew all that, but they didn’t care. All they cared about was putting me away for 145 years.

Anyway, the verdict was awesome. It was so powerful to experience God’s love at that moment. They tried to give me 145 years, but God said no. Now I am even more motivated to spread the word of truth and to tell people to say no to drugs, gangs and that lifestyle.

God gave me a victory, and soon I will be free. When I was a kid, I always knew God was there. I just didn’t know how to communicate with him and I allowed other influences to cloud my mind. But let me tell you something: I will sing to the top of the mountain that there is a God, who saved and delivered me from 145 years in that courtroom. God is love, and never forget that fact.

To everyone at the T-Bone Appreciation Society: I thank all of you who have allowed the goodness to come out of your hearts to help me. Please know that we should never give up no matter how hard things get, and please be aware of what evil does to people like those in the court. Believe in what is good, love people, think and speak positive. I am on fire, full of joy, so right now all I want to do is say how good life truly is.

I have one minor charge to deal with. So still I must wait in this place.

Shaun Attwood, you are a true friend. Jesus said a man can call himself fortunate if he can count his friends on one hand in a lifetime. God bless you, my friend, my brother. Keep telling the kids to stay away from drugs and to watch out for sickos. Peace to you, my brother. I’ll write more soon. Here’s to you, Shaun, and to me coming over to England for a visit.

Each one teach one,
Strength and honour
Steel embrace

Click here for descriptions of all of the prisoners I write about at Jon’s Jail Journal ranging from Mafia hit men to giant transsexuals.
Shaun Attwood
Posted by Jon at 1/26/2015 01:24:00 PM 7 comments:

A jury found T-bone not guilty of all of major charges. For three years, I’ve been unable to post online about T-Bone’s case because it may have been used against him in court. The bottom line is the State of Arizona wanted to put T-Bone away for life. The justice system in Arizona is extremely racist and T-Bone is considered extremely dangerous because of his military training as a Marine. To put T-Bone away for life, the prosecutor and Phoenix police procured false witnesses against him, but the jury saw right through the lies. Before trial, the prosecutor had warned T-Bone that he needed to sign a plea bargain admitting guilt, and that if he did not and he lost at trial, the prosecutor would ask the judge for a 145 year maximum sentence. T-Bone’s own lawyer, a public defender appointed by the State of Arizona, urged T-Bone to admit guilt and sign a plea bargain for a shorter sentence. Unwilling to admit to crimes that he hadn’t committed and praying to God for a miracle, T-Bone managed to win at trial even with all of the odds stacked against him by the crooked state of Arizona. T-Bone has one minor charge remaining, which wasn’t filed by the police in the amount of time legally required, so it looks like that charge may be dismissed.
Click here to read the previous letter from T-Bone

Click here for descriptions of all of the prisoners I write about at Jon’s Jail Journal ranging from Mafia hit men to giant transsexuals.
Shaun Attwood
Posted by Jon at 1/22/2015 01:27:00 PM 4 comments:

A few days ago, I was doing a talk in London. The bell rang. I still had 10 copies of Hard Time 2nd Ed to give away, so I said anyone who comes to my table and asks a question will get a book. One hundred students stampeded, almost knocking my table over and my bottle of water went flying. In a frenzy of arms and hands, the books were snatched up. I had to laugh. 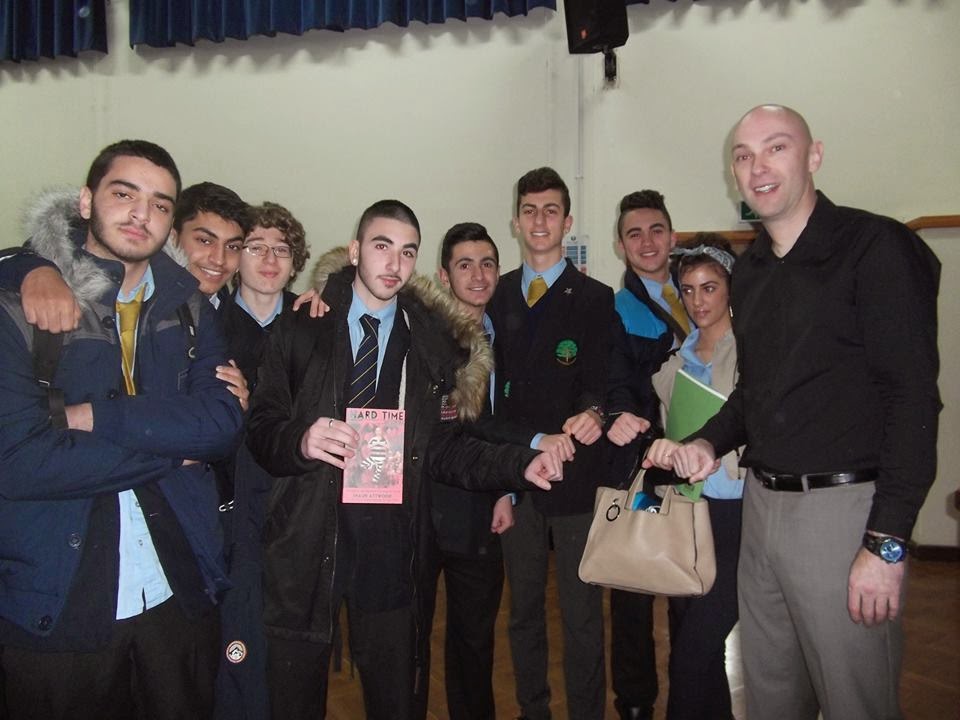 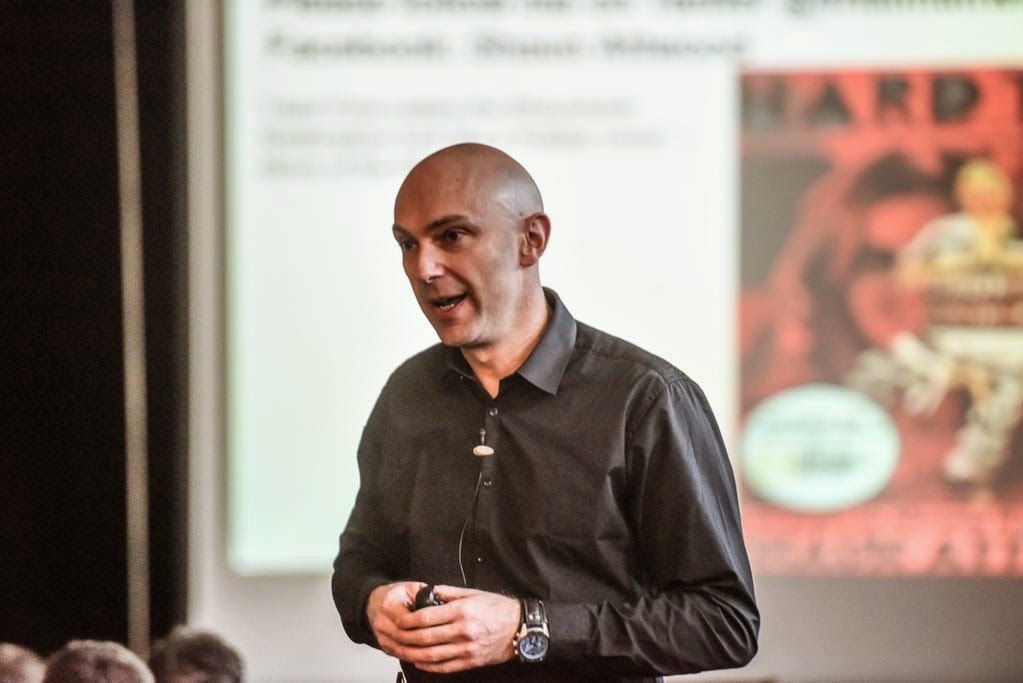 I thank Jaideep in India for these questions:

Please share some of the best memories of your childhood?

Going for walks with my dad in the English countryside. I’d climb trees, investigate ponds and be amazed by the sight of fish, frogs and toads. I’d be horrified by leeches.

Tell me about your education?

As a teenager, I was equally interested in the stock market and computer programming. That’s why at college I did A level mathematics, physics and economics. I hedged my bets, so that my career could go in either direction. In the end, my interest in the stock market won out. At Liverpool University, I earned a degree in business studies.

What career did you plan during your education days?

Living in a small chemical-manufacturing town, I dreamt of making a fortune in the stock market and living in America, where everything seemed to be so much bigger than what I was used to: the roads, houses, cars…

What languages can you speak and write?

A little Spanish. A tiny amount of Chinese, as I studied Mandarin in prison.

What is your biggest source of inspiration in life?

On the road of life, I met many great people who have inspired me. They range from my family to certain prisoners, some of whom had committed serious crimes, but who protected me out of the blue when I was in danger. For example, Two Tonys, an Italian Mafia associate serving 112 years for killing rival gangsters. He protected me and also introduced me to his favourite book: One Day in the Life of Ivan Denisovich, a novel by Aleksandr Solzhenitsyn. The book taught me to appreciate the small things in life, so that I don’t go looking for excitement in the wrong places, which I detail in this video:

Incarcerated, I read over 1000 books in just under six years, including many original texts in psychology and philosophy. I was inspired by great philosophers such as Plato and Marcus Aurelius. Meditations by Aurelius mentions standing strong even when life is throwing its worst at us, which is particularly inspirational for prisoners.
Marcus Aurelius — 'Be like the cliff against which the waves continually break; but it stands firm and tames the fury of the water around it.'
I used this quote at the beginning of my book Prison Time.

Click here for questions I answered for Nat Geo

Brother Shaun, I really appreciate the Christmas money you and your blog readers sent that is enabling me to eat. Thank you to everyone for their help and kindness. I know that it’s godsent.

A young white man in here was hungry. He didn’t have anything to eat, so he asked a black guy if he could clean his cell for something to eat. All hell broke loose. Some white gang members jumped the young guy. He’s walking around with black eyes, all because he tried to scrape some money together to get something to eat.

I gave him some food. He has people on the streets who will send him money. I hate that he got jumped because he had no food, and he wanted to clean a guy’s cell who is black. It is so sad.

Sheriff Joe Arpaio feeds the people here worse than they do at Gitmo, where they at least get fresh food three times a day. I’ve tried to figure out Sheriff Joe Arpaio. Does he get off on pain and suffering, causing people to fight for food and just being mean and nasty?

There has been fights all over the place, mostly over food or drug debts or a racial issue of some kind. In court, people are signing their lives away, just so they can get out of here and into the prison system.

A gang banger in here with me is making unnecessary noise, so I’ll talk to you later, if you know what I mean.

Click here for descriptions of all of the prisoners I write about at Jon’s Jail Journal ranging from Mafia hit men to giant transsexuals.
Shaun Attwood
Posted by Jon at 1/07/2015 11:14:00 AM 2 comments: