My New Book: American Made

The second book in my War on Drugs series is now available as a paperback and an e-book: American Made: Who Killed Barry Seal? Pablo Escobar or George HW Bush

Amazon UK Link
Amazon USA Link
All of my books 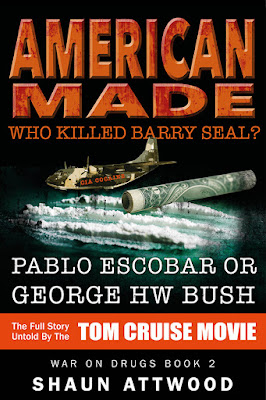 Set in a world where crime and government coexist, AMERICAN MADE is the mind-twisting true story of CIA pilot Barry Seal that the Hollywood movie starring Tom Cruise is afraid to tell.

Barry Seal flew cocaine and weapons worth billions of dollars into and out of America in the 1980s. After he became a government informant, Pablo Escobar’s Medellin Cartel offered a million for him alive and half a million dead. But his real trouble began after he threatened to expose the dirty dealings of George HW Bush.

AMERICAN MADE rips the roof off Bush and Clinton’s complicity in cocaine trafficking in Mena, Arkansas.

“A conspiracy of the grandest magnitude.” Congressman Bill Alexander on the Mena affair.

Shaun Attwood’s WAR ON DRUGS SERIES – PABLO ESCOBAR, AMERICAN MADE, WE ARE BEING LIED TO and THE CALI CARTEL – is a series of harrowing, action-packed and interlinked true stories that demonstrate the devastating consequences of drug prohibition.

Now in this place you have young white kids running around saying “white power” because they have been taught to think like that. And the Mexican, black and native men are walking around with a submissive attitude and getting high and drunk. That way they can cope with not being able to achieve anything; so they think.


Anyways, the drinking has become a serious problem here. Last night, a riot almost happened because of the drink. The guards bust prisoners with hooch every single day. They’ve had several fights behind it and there was a riot at building 3, where several guys got drunk and one got caught having sex with a white kid, who was in this building and got moved because he wanted to be a bulldog. Some of the gays got word of them having sex. They went in there drunk and kicked the white kid’s butt. Then the guy who was having sex with the kid turned on the kid as well and they both messed him up! They were all drunk.

I was watching Nat-Geo the other day and it had this Englishman as the host. It enlightened me to the fact that there has been a lot more racism than what I though in areas of public service. The “I don’t give a damn” attitude by a lot of different people has been bred into them by sin, which leads to a cold heart. It’s an old trick to use fear and hate to control people! Forget fear and forget hate. Let’s move on to more understanding and become one people, one hope, one love. That’s what these so-called politicians should be saying to one another and to countries around the world!

So I’ve been doing a lot of intervention and does it feel good, wow! It’s so awesome helping people. The drugs have slowed down and most guys don’t miss them, but having nothing to do but sit around and let their imaginations go wild! Idle minds are big problems in this place. But after watching that Nat-Geo special on race, I now see why some people make excuses (including myself) to use drugs. We hold on to things that are negative and allow them to control our thinking and to be less spiritual.

Click here for descriptions of all of the prisoners I write about at Jon’s Jail Journal ranging from Mafia hit men to giant transsexuals.
Shaun Attwood
Posted by Jon at 12/14/2016 11:42:00 AM 91 comments: