So, the other day, I witnessed a guy walk up to another, and tell him to give him his store. I intervened, of course, and the guy threatened me. I started to pray. And I prayed and prayed.

The guy came back with two of his buddies. I just stood from a distance and watched them. After twenty minutes of them thinking about what they were going to do, one approached me.
“Who do you think you are?”
“There’s no need for talking,” I said. “Just stop bulldogging people.”
“Mind your own business. You’re nobody.” Being a Crip gang member made him think that he was immune to the rules that govern our behaviour in this type of place.
“Just leave the little crazy dude alone.”
“I’ll make the crazy dude suck my dick if I want to.” 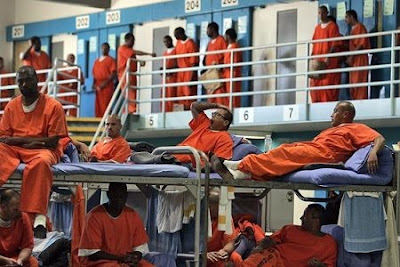 There aren’t many blind spots in here, but I was looking around trying to find a place to take him. I realised I could take him to his cell when he went to his building. In his eyes, I saw evil and hate.
“I hear you, man,” I said. “I’ll catch you later.” I turned my back, and went on my way.
He went to give his buddies high-fives and claps.

Two hours passed. I watched him walk across the yard by himself with a bag of store [snacks purchased from the prison]. So, this guy hadn’t been on the yard two days, and he was already set in thinking that he was going to push people around.
Walking real slow, I followed him to his building and watched him walk to his cell. When the officer was looking the other way, I walked over there without drawing attention to myself.

As I pushed his door open, his eyes popped out of his head. I closed the door. With my foot, I stuck a shoe under his door, so it wouldn’t lock. All his toughness left him.
“I don’t want any trouble,” he said three times.
“So you’re gonna make somebody suck your thang?”
“He’s gay, OG [Original Gangster]. He’s already gay.”
“But you made him suck your thang, didn’t you?”
“Well, yeah, but–”
“I’m gonna teach you about being a man.”
“What you gonna do?”
“Stand up,” I said, looking him in the eyes. “You’re gonna take all that store you got, and put it in that box, and you’re gonna give it to the three openly gay men on this yard.”

Turning around, he started to do what I told him. Then, he mumbled something under his breath.
“What did you say?”
“Nothing.”
“You’re lying.” I saw the hate in his eyes, and noticed that he had picked up a pen real smoothly. With my left hand, I knocked it out of his hand. I smacked him and took all of the fight out of him.

Unbeknown to me, a transgender queen was about fifteen feet outside the door, watching and trying to listen to everything that was taking place. Upon sensing her presence, I waved her in. The guy gave her back the $40 worth of store he’d taken, and apologised.

We all prayed in that room together. We all shook hands, and the bully even admitted that he needed to change. He sat back, put his head down and thanked me, saying that he needed discipline. I said that we all need help. I told him that I had to go and left.

He left the yard that night, hopefully a changed man because I know his pride was hurt. No one wants to be humiliated like that, but it felt good to help the weak.

Now things are back to the way they always are. I’ve stopped a few incidents by the grace of God. I hope that I can maintain the same level of caring that I possess today.

L&R from Arizona to the T-BoneAppreciation Society

The Mexicans and the Mexican Americans had a riot today. I was about to go out of the cell door, when I saw a tall Mexican stab the leader of the Mexican-Americans in the face and eyeball. Everybody started fighting. 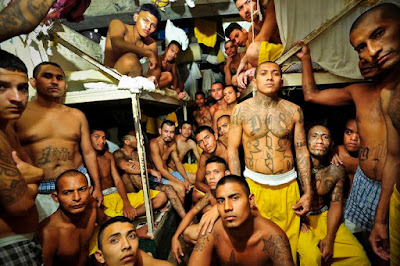 What’s sad is that the guards knew it was going to happen. To prevent riots, they usually call in the heads of the gangs, and talk to them to stop the whole mess.

To stop the riot, they brought a guard with a dog and chemical-sprayed a bunch of people. God knows how many. Can you believe these guards? The spray got all over me. It was extremely nasty. It will take you to your knees and take all of the fight out of you.

Now we’re locked down. All of the guards are stood around talking and laughing.

When you think about stuff like this, you see the waste. The prisoners could be doing something to help society, like working or getting educations. Instead, they have grown men sitting around each and every day, doing nothing except drugs like heroin, meth and spice, and scheming against each other, and then they wonder why things like riots happen!

Please say hi to the students at the T-BoneAppreciation Society, and let them know I do think about them and they are in my prayers.

Click here for descriptions of all of the prisoners I write about at Jon’s Jail Journal ranging from Mafia hit men to giant transsexuals.
Shaun Attwood
Posted by Jon at 6/09/2016 12:32:00 PM 1 comment:

I'm trying to get my book Pablo Escobar: Beyond Narcos published in time for the second Narcos' season. Any feedback you can provide in the comments would be appreciated on chapter 1 below: 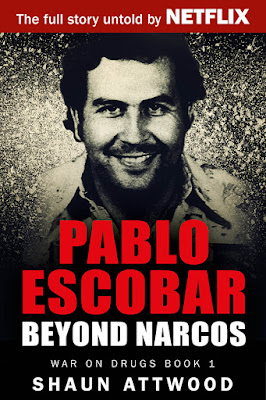 
When a policeman on Pablo’s payroll was moved to another district, he snitched out the operation. The police waited to ambush a convoy of trucks. They would all get rich confiscating so many goods. Pablo had stopped for lunch, and told the convoy to continue without him. Thirty-seven trucks were seized. A driver called Pablo, who said to tell the other drivers not to speak to the police. With the police after him, he took a bus back to Medellín. Lawyers got the drivers released, but were unable to retrieve the merchandise. Pablo’s contraband partnership with the kingpin was over.