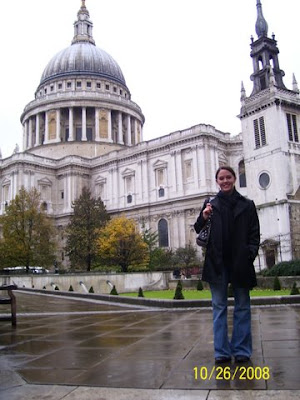 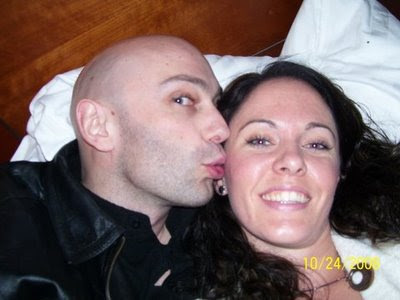 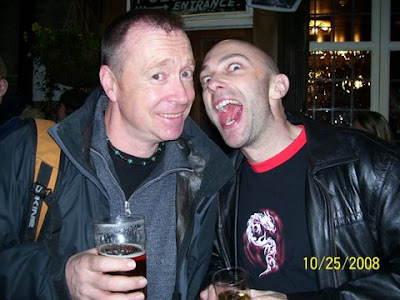 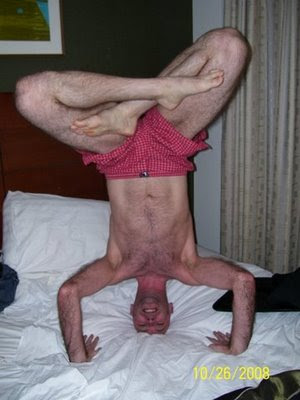 The Royo Romance (Part 27)
Royo Girl - An intelligent and attractive criminology graduate who used to visit me in prison. Whether her interest is based on love or she is writing a thesis on my criminality is an open question. She's presently visiting me in England.
Click here for Part 26.
.
Pics:
1 Royo Girl outside of St. Paul's Cathedral
2 Trying to get my "mack on"
3 About to bite off Mike Hotwheelz's nose
4 Hotel-room yoga
.
Here's Royo Girl's version of the weekend:
.
As requested, I am writing my own account of my weekend in London with Shaun. In fact, readers should bear in mind that the level of accuracy will be much higher in the paragraphs following this one than in the "other version." And as all great stories do, I will start at the beginning.

My first day began very early for me (given that I am usually eight hours behind the UK) when I got off the plane and made my way to the hotel. As Shaun couldn’t bother to get up before 10am, I had to linger around the hotel until he arrived in the late afternoon. I have to admit that it was worth the wait, though. Seeing Shaun in the lobby felt incredibly natural, as though we hadn’t missed a beat in the year we hadn’t seen each other let alone been on the same continent.

Shaun and I walked about central London taking pictures of all the typical touristy places. We took a few together and even held hands. Awww… On the way back to our room, some crazy Englishman decided it would be a great idea to get some champagne at the local Tesco for the night. And the rest of the night would follow with similarly intelligent, well-thought-out ideas.

A night of pub hopping seemed to be in order. My counterpart didn’t seem to have the same stamina for caffeine and alcohol on par with myself, allowing the stimulants to go straight to his head and providing me with seemingly endless hours of entertainment. When I would do a shot of tequila, Shaun would do a "shot" of Apple Pucker. You can only imagine what other girly drinks were ordered and by who! We went from pub to pub for five hours. It was quite a bit of walking I must admit, but I didn’t mind so much. The amount of whinging that came out of Shaun’s mouth, one would have thought he was wearing the heels. Bloody hell! It was a fantastic night out, though.

Day two was equally as exciting with my introduction to Mike Hotwheelz. Without a doubt, Mike is one of the wittiest, funniest, and cheekiest little sods I’ve ever met. He made walking down to Soho the experience of a lifetime. I will never forget his description of Shaun: “… the sketchiest little sissy I’ve ever met.” HAHAHAHAHA! I will probably laugh about that for months to come.

The three of us sat down for a nice Italian meal in Soho whilst we watched punks and drag queens meander around the streets. I listened to tales of wildness and deviancy and days gone by. The boys ate their pizzas and I my pasta before we made our way back to the tube station to meet my friend Astro.

The streets of Soho on a Saturday night are pure madness. After collecting Astro, the gang of now four miscreants travelled back to the pubs, clubs, and wackadoos. Along the way, we watched the narrow pathways become so overcrowded with countless bodies that a man toppled over the construction fence. Rest assured that the man saved his beer, just not himself or the fence.
Mr. Hotwheelz led us down a back alleyway to what would normally have been a nice, quiet little pub. However, on this night, it was overrun by loud, American NFL fans. To think that I flew halfway round the world to find myself surrounded by Americans. What are the odds? Our gang of four quickly became five as we picked up a 6’5”, deep-voiced American with an extremely large build originally from New Orleans now living in Prague. Needless almost to say, he was interesting and highly entertaining. Although he dwarfed everyone, it was pure comedy to watch the ginormous American chat with five-foot Astro.

The night ensued with banter, beer, and whatever fruity ciders Shaun could find. After the second pub, the American rejoined his NFL hooligan troops and we made our way to a quiet pub with cheap booze. More laughter and wild tales from the boys as Astro and I watched from across the table. Around eleven, we all separated and called it a night.

Our Sunday was what any Sunday should be, relaxing and wholesome. We took more touristy pictures and even sat in for part of a service at St. Paul’s Cathedral. Shaun and I hung around Piccadilly Circus waiting for my friend Genevieve to arrive from work. We sat at the footsteps of the fountain, watching people as they went by doing all the peculiar things that they do.

Genevieve finally arrived at Piccadilly and we made our way to the northeast of London. Shaun rode his first double-decker bus in two decades. It’s moments like that when it feels like I am part of Shaun rediscovering the world after his incarceration. I’m glad that I’m able to be part of something so completely innocuous at face value and yet so meaningful when you put it all into the bigger picture. People take too many of the little things for granted until it is all ripped away one day.
Shaun and I enjoyed a fantastic Indian meal with my friend and her husband of Mauritius descent. There was discussion of foreign films and cultural differences between the East and West and between the English and Americans. The night ended with us all feeling as full and happy as water buffalos, and Shaun and I travelling back to the hotel, where I desperately struggled to fall asleep before 3am. I look forward to continuing the story now from Widnes, which I swear sounds like weirdness when Shaun says it.
.
Email comments to writeinside@hotmail.com or post them below
Shaun P. Attwood

"People take too many of the little things for granted until it is all ripped away one day"...great comment, all too true, and great post, RG.
Everything Shaun says sounds like weirdness, LOL (to us Americans, anyway). Ok, now we simply must have costume pix from the homestead.

nice post royo,
I love reading about peoples travels and dealings abroad. Perhaps I am living vicariously through others this way. Anyways, you are gorgeous and thanks for the read.
big jason

p.s. Shaun was taking it easy with the beverages because he didnt want to blow chunks.lol

Love it, thanks for your take. You two seem to have nicely matching senses of humour and wit.

I still don't trust her, Shaun. Too clever by half.

But I'll grudingly give her credit for having beautiful eyes.

What’s up Shaun, I see you’ve been enjoying yourself from the latest journal entries… had a few ale’s with Hotwheelz I see? Or should I say he had an ale an you sipped on a fruitier flavored beverage =) I wanted to wish you a Happy Birthday, al ittle belated but with some of the brain damage we’ve done to ourselves 3 days ain’t bad. I can’t believe you’re all the way across the pond and you’re heart still has you yearning for females from the desert =D J/P but the pic’s look great she definitely appears to fit with the new you, but Tucson to London is quite the long distance relationship however from the looks of you two together that might be a dilemma worth resolving. I truly hope you end up to be more than a thesis for her. Cheers to you and Royo and Hotwheelz too, I hadn’t known they’d deported him as well. Fuq’n Americans! their expelling the Best Brits we got =) Well again I hope your day was a good one but I’d venture it must’ve been as it was your first in years you could celebrate freely, and for that ‘twas a good day for us all. Much love, respect, and always blessings from across the way… peas…

I know what you mean about going all that way to find yourself surrounded by Americans. I was in Florence, saw an ad for a pipe organ concert at a church, went and found that... the organ concert had been replaced by a a choir... from Colorado.

They were quite good, though.

So are you hoping for romance with Shaun, or are you content with friendship?