Conversations with a Dead Man Part 1 (by Weird Al) 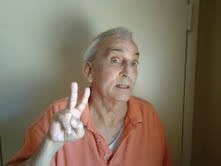 One of my closest friends in prison, Weird Al, was deathly sick a few months ago. He’s presently in a nursing home battling hepatitis C. In recent weeks, his energy has picked up. He now has a lap top, internet access and a Facebook page. He has agreed to share some stories at Jon’s Jail Journal, starting with this one:

My name is Allan Mac Donald and I hope this day finds both you and yours happy and healthy. If you have been a regular reader of Shaun Attwood’s blog, you may already know me as “Weird Al” or “Noodles.” I am currently in a nursing facility fighting a 30 year battle with a liver disease called hepatitis C. Right now the disease, which I got from blood transfusions in a foreign country in the mid-1970s seems to be winning. Please allow me to say a few more things before I tell you this story. This is a very real story. It happened in Mexico in the mid-1970s and still, at times, haunts me. There is no need for me to use made-up names since all the principals, with the exception of myself, are long dead. I do not want or need sympathy. I fully realize that I brought all this into my life because In my younger days I was a very greedy, manipulative and selfish person. It is a story of an out-of-control ego, mine, which ran amok.

I woke one morning handcuffed to a dead man. His name was Jaquine Reyes. I had nicknamed him Jack. He called me Alonso when he was real serious, but mostly he simply called me Gringo. Jack was a good man. A simple man, a farmer, who I had talked into growing marijuana for me and my partners in crime. I was determined to control my pot business from actually growing it all the way through the retail sales of my product. This was before the big Mexican drug cartels took over.

I found myself locked-up in a small cell belonging to the Federal Police in Uruapan, Mexico.  Uruapan is relatively small town nestled in the Tierra Caliente Valley in the Mexican State of Michoacán, Mexico. I was under no illusions. The Federal Police had known about me for some time and had tried more than once to find me, but while I did maintain a home in Mexico, I was seldom there.

Before waking up handcuffed to the deceased Jack, I had been pulled over for a simple traffic violation and the whole situation escalated from there. I had absolutely no marijuana with me at the time I was pulled over, not even a seed. This did not seem to matter to the Federal Police. They saw this as an opportunity to finally nail me to the wall and were not about to let this chance slip through their hands. You see, I had been performing all my nefarious deeds in Mexico without paying bribe money to anyone. This more than anything seemed to upset my captors.

Part 2 will be posted soon.

Please support my friend Weird Al during his battle with hepatitis C. If you want to send Weird Al well wishes he welcomes your emails at  iammd53@gmail.com and you are welcome to post well wishes to his Facebook wall and add him as a friend.

Here’s Weird Al’s true and tragic story of Suicide by Cop that I originally posted to Jon’s Jail Journal in 2005:

Weird Al is short and grey and doesn’t seem to belong in prison. Formerly a real-estate investor, he spends most of his time in prison working on lawsuits and helping prisoners with their lawsuits.

“It’s a coward’s way of committing suicide. You get the police to shoot you because you don’t have the nerve to do it yourself.”

“My girlfriend had recently died from over-consumption of Marlboro Light One-Hundreds, and over four or five months I became increasingly depressed and crazy. I bought a book by Jack Kevorkian, and tried his suicide method: a bottle of vodka, sleeping pills and a plastic bag over your head. Obviously it didn’t work. I woke up in hospital after my neighbours called the police because I was knocking things over. The police found me with a garbage bag over my head, and after a visit to the hospital, I was sent to the nuthouse. I lost all faith in Kevorkian. I thought a bullet would be a surer way to do it.”

“What was your next suicide idea?”

“To shoot myself. But then I thought, My family is gonna have to clean my brains off the wall. I didn’t have the nerve to do it. After staying in bed for a few days, an idea came to me: Rob the bank, and the police will come and shoot you. I slept great that night. I woke up happy and watched Regis and Kathy Lee because my bank didn’t open until ten. I wrote a note, I have a gun. I am here to rob you. And I put, This is not a joke, so they’d know I was serious. I went to my local bank where I’d done business for eight years.
When I walked inside, there was a line of people. You’d think I would of gone straight to the front. If I was gonna get shot, why stand on manners? But I’m a polite person. I stood in the line, and waited, wondering which teller I’d get. I got a familiar lady clerk.

I gave her the note, and her eyes went as big as saucers. I kept my left hand in my pocket pretending I had a gun. She opened the drawer real quick. I grabbed the cash, put it in my pocket and walked outside to sit on the curb next to my car. I figured that the police would screech into the parking lot at any second, and shoot me.”

“No. They didn’t come right away. It took them ten minutes to get there. I was getting pissed off. I was expecting a big scene and an adrenaline rush. I wanted to go out like Bonnie and Clyde. They didn’t screech into the parking lot. They calmly got out of their cars without their guns drawn. I thought, Wait a minute, something’s not working here.

His partner said, 'What in the world’s going on here?'

One said, 'Yeah, we know that. But why? You have more money in the bank than you stole.'

I had fifteen thousand in the bank, and I stole seventeen hundred. It got worse from there. They arrested me and took me to Tempe Police Department. The FBI came down, took one look at me and said, 'Forget it, he’s all yours.' I thought that I had an original idea, but the police said it happens all the time, that people often try to get the police to shoot them, usually in hostage situations. I thought, Son of a bitch, I shoulda took a hostage.”

“Mad, because I was still alive. I felt stupid because they didn’t shoot me.”

“It wasn’t something you could practice for?”

“True. There’s no courses you can take to do suicide by cop.”

“You could say it’s a one-shot deal?”

“Maybe two or three shots if you pull it off right. You wouldn’t be trying again, or going to jail either.”

“Are you going to try again?”

“Oh, no. I have it all figured out now. I’ll take a backpack, hiking gear, and a gun into the desert, wait a few days until I have no food and water, then shoot myself without bothering anybody – there’ll be no mess for the family to clean up. Kevorkian’s method was bogus. I should sue that bastard for the trouble he caused me.”

"Perhaps suicide by cop didn’t work because you’re not meant to die just yet?”

“Maybe. Anyway, I haven’t got the urge to kill myself right now, but you never know what might pop up.”

For the bank robbery and attempted suicide by cop, Weird Al was sentenced to three and a half years for assault.

Are you paying more than $5 per pack of cigarettes? I'm buying high quality cigs at Duty Free Depot and this saves me over 60% on cigarettes.

Vaporfi is the best electronic cigarettes supplier on the market.