Kayla Hornewer, a 22-year-old un-sentenced woman arrested for drug offences lost her unborn child because of food poisoning at Estrella jail. Food poisoning is widespread in the jail system run by Sheriff Joe Arpaio, who boasts that it costs him more to feed his police dogs than his prisoners. Lots of the food at the jail comes from businesses that are getting rid of it because it has expired. Kayla contacted bacillus cereus, and had a spontaneous abortion due to severe sepsis. She was in her fourth month of pregnancy.

Photo of Sheriff Joe Arpaio boasting how bad his food is to the media: 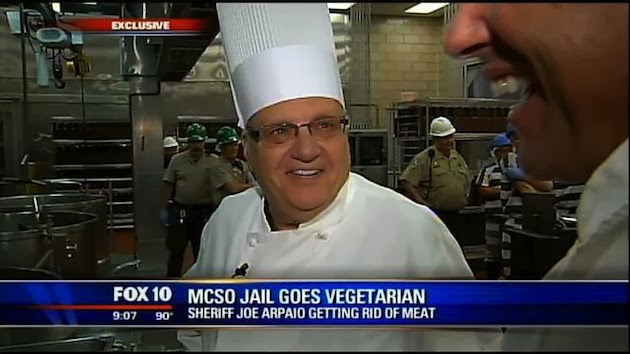 In an incident report submitted to Mothers Against Sheriff Joe Arpaio, one pregnant inmate had a miscarriage while sat on the toilet and collapsed on the cell floor. The guards came in, revived her with smelling salts, and ordered her to fish the dead baby out of the toilet. The guards refused to take her to the Medical Unit and she had no subsequent treatment.

One of my female co-defendants who spent two years on remand in Sheriff Joe Arpaio’s jail said that she knew of many miscarriages happening in the Maricopa County jail and in the Arizona Department of Corrections as a result of malnutrition, food poisoning and the lack of medical care. In the Arizona Department of Corrections, the dead babies were buried in the desert. She added that some women serving life sentences ended up pregnant after having consensual sex with the guards. The babies that survived were handed to the next female prisoners to be released, who were basically told to have a nice life with the child. Under the Prison Rape Elimination Act of 2003 (PREA) all sex in prison with staff is classified as rape.

The female inmates in Estrella jail recently went on hunger strike over what happened to Kayla and to protest the mouldy rotten food. Sheriff Joe Arpaio’s responded by locking the jail down and denying the women phone calls to the outside world.

Blog I wrote about the jail’s evening meal “red death”

Original blog about the jail’s food.

Lots of unsavory things have happen under "the Sheriffs" watch and he has not been held accountable.In this day and age when a person does harm unto others, then harm will surely come unto thee.Break a leg Sheriff.

Dear Shaun,
I don't know if you will read this but you visited Herschel Grammar School for a talk. We just wanted to say thank you so much for coming in and giving such an inspirational talk, and thank you for bringing awareness to the harsh reality of prison conditions. Your talk has definitely served its purpose. Oh, and thank you for telling us about people like T-Bone.

Thanks so much Hershel Grammar School. Your message makes everything I went through worthwhile. :)

Do you have a source?

yes I do AJ

Can you point me to the link of the source, please? I could not find anything about the case...