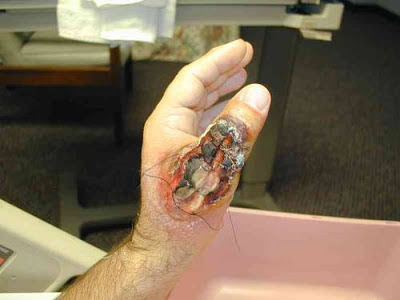 
Someone decided the Russian prisoner, Yordan, was the closest thing we had to a doctor because he'd been in the military and knew how to dress wounds. Inmates from all of the races inundated him with demands for medical treatment due to a menace from the insect world: spiders that crawled on us during the night and bit while we slept. The culprit was rarely seen. Some thought it the brown recluse, others the Arizona brown. Whatever the spider, the result was always the same: during the first few days, the bite would slowly expand from a small white blister to a pus-oozing sore; over the next few, tissue would slough away from the abscess leaving a sunken ulcerated crater, exposing underlying tissue. These holes were sometimes as broad as the palm of a hand. Other side effects included fever, chills, vomiting and shock.


Alejandro was so big, his flab crept up and down the wall as he breathed during his sleep. With scant room for spiders to manoeuvre around him, he was inevitably bitten. His written requests for treatment were ignored. When the pus began, and Officer Mordhorst rebuffed his pleas for help, inmates from all of the races began to sympathise.


“Give him treatment!” Gravedigger yelled at Mordhorst in the day room.


“He must go to Medical. Look at his damn back! He must see a Yankee doctor,” Yordan said.


“It’s getting worse and worse,” Alejandro said, his face pinched.


“I already told you guys: the Medical Unit does not treat insect bites. That’s the jail’s policy,” Officer Mordhorst snarled.


Later that day, Yordon entered my cell. “These damn Yankees think I am a doctor.” He seemed strained, yet proud. “Now they want me to take care of Alejandro’s spider bite. Will you help me?”


“How?” I asked, honoured to be included.


“Gravedigger and the others are going to hold Alejandro, so the big bastard doesn’t move, while I squeeze the pus out, and I need from you some salt, and perhaps you will help me put salt on the wound?”


Revolted by the pus aspect, I didn’t think twice about helping my friend: “Count me in.” Plagued by outbreaks of mouth ulcers due to stress and malnourishment, I’d been collecting the tiny salt packets served with the chow because gargling salt water temporarily relieved the burning sensation the ulcers caused. I retrieved the salt packets from under my mattress, and followed Yordan into the day room.


The bullet-wound scars on Alejandro’s back paled in comparison to what looked like a baseball of yellow plasma trying to exit his body. I was flabbergasted that a spider had caused that. When Yordan fingered the wound, thick yellow pus ran down Alejandro’s back, triggering my gag reflex.


“It hurts like fuck! Are you sure you know what you’re doing?” Alejandro asked.


“Trust me. I was in the Russian military. This wound is easy for me.”


“He ain’t no doctor!” yelled the big hillbilly, George, sat with the TV-watching crowd. “The commie bastard’ll make you worse!”


“The irritation will be less when I am finished. Someone bring me toilet paper!” Yordan caught a toilet roll launched from the balcony, unspooled some and swabbed up the pus. “Men, I need you to hold him steady,” he said in the tone a commander reserves for troops entering battle.


Yordon pressed his thumbs against the wound.


Alejandro moaned. The wound gushed. “It hurts,” he whined.


“It hurts! Ah good! It will hurt less when I am finished.” Yordan pressed harder, freeing more pus. I wondered if he knew what he was doing.


Sweat was streaming from Alejandro’s short black hair, converging on his neck, branching into tributaries on his body, and coagulating with the baby powder coating his skin.


Passing Yordan toilet paper, I hoped that was the last of the pus.


“We done yet?” Alejandro asked, swaying, destabilising the men holding him.


“Keep him steady! We are not done! The poison is still coming out! More toilet paper please!” Yordan boomed.


Yordan cleaned up the fresh pus, and applied pressure to the rim of the lesion.


Groaning like a dying elephant, Alejandro shifted, dragging along the men holding him.


“We need more guys to hold him,” Gravedigger said.


Everyone in the day room stopped their activities to watch more volunteers steady the big man.


“I think that is it. One moment! Let me see. No! No! We are not done.” Gazing like a fanatic, Yordan discovered a new region of pus to finger.


Alejandro groaned and shifted again, he looked as if about to faint.


“That must be it,” Alejandro said, sweat dripping from his ears and chin.


The prisoners eased their hold on Alejandro.


“Wait, men! Let me see.” Yordan thrust his fingers into the sore. The ejaculation of pus, the largest so far, surprised Yordan, delighted Gravedigger, and shocked the rest of us.


Alejandro stumbled forward, tugging everyone holding him. They steadied him again. It seemed a pint of pus had come out by now.


“More toilet paper!” Yordan massaged the area, exhausting the supply of pus. “Now I will apply the salt.”


I tore open the tiny packets, tipped salt into Yordan’s palm, and cringed at the prospect of what he would do next. Yordan sprinkled salt onto the wound, and rubbed it in. Alejandro wailed so loud the hermits rushed from their cells.


“There. Thanks to my Russian military training and the solidarity of my Yankee and Limey assistants, you are all fixed up now.” Yordan smiled.


With their bee stripes stained by a combination of pus, sweat and baby powder, the men released Alejandro to much applause. Alejandro swayed, but didn’t collapse.

by Shaun Attwood author of Hard Time, Party Time and Prison Time
Other than untreated spider bites, US prisons present various threats such as gang rape and beheadings as told in this video:


And lets not forget gang warfare and riots. The riot I got caught up in, I describe in full here.

That video is from my full Locked-Up Abroad episode:

There are many more prison videos on my YouTube channel.

Links to some of my most popular blog entries over the years:
Cockroaches
Rapist on the Yard by Warrior
T-Bone

medical care ....non-exsistent for prisoners. gee's what century are we in now!


medical care mostly does not exist for inmates.
$$$$$ SICK COUNTRY...21ST century my ass!

Sheriff joe you go. Maybe next time they won't do the crime.

It is because of men like "Anonymous" that Sheriff Arpaio continued to get elected. I would NEVER spend a red cent in AZ. again, and I used to live there.

Someone might have pointed out that spiders aren't insects. Since their bites are venomous I would think it would be a different thing.

oh my god look at that picture

I think i threw up in my mouth. Nice writing, the visualization was strong and real. Im nauseas now

Are all of the federal judges in AZ asleep? This is deliberate indifference to a serious medical need that also falls below the community standard for health care.

The Sheriff should change the rule about not treating spider bites.
He should also remember that those who don't show mercy will not receive any themselves on Judgement Day...

I'm so glad I saw your story on the show about being locked up abroad. I had always thought the Sheriff in the jail you were in was a great example of how to do it right. I had absolutely no idea how vile of a man he truly was. I pray that you getting the word out makes a difference and he gets impeached. God bless you!

Did you know that you can shorten your links with Shortest and make money for every visit to your short urls.